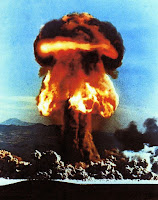 On July 29 2017 I published an article titled “Shoot The Next One Down,” now we may ‘have to’ in order to defend our base and the people of Guam.

North Korea said yesterday it is planning for a nuclear missile strike on the U.S. Pacific territory of Guam, just hours after President Donald Trump told the North - any threat to the United States would be met with "fire and fury."
Pyongyang said it was examining a plan to strike Guam, a small island of around 162,000 people in the western Pacific approximately 1800 miles south west of North Korea and the site of a U.S. military base that hosts a submarine squadron, an airbase, and a Coast Guard group.
A Korean People's Army (KPA) spokesman, in a statement carried by state-run KCNA news agency, said “the plan to strike Guam would be launched at any moment, once leader Kim Jong Un makes his decision.”
In another statement citing a different military spokesman, North Korea also accused the United States of devising a "preventive war" and said any plans to execute this would be met with an "all-out war, wiping out all the strongholds of enemies, including the U.S. mainland."
Washington has warned it is ready to use force if need be to stop North Korea's ballistic missile and nuclear programs.  Speaking to reporters in New Jersey on Tuesday, Trump issued his strongest warning yet for North Korea.
Reminiscent of  President Truman just before dropping the Atomic Bombs on Japan in August of 1945, Truman said “They may expect a rain of war from the air the like of which the world has never seen.”
Trump said: "North Korea best not make any more threats to the United States, or they will be met with fire and fury like the world has never seen."
North Korea has made no secret of its plans to develop a nuclear- missile able to strike the United States and has ignored international calls to halt its nuclear and missile programs.
It says its intercontinental ballistic missiles (ICBMs) are a legitimate means of defense against perceived U.S. hostility. It has long accused the United States and South Korea of escalating tensions by conducting military drills.
Tensions Rise
The United States has remained technically in a continuous war with North Korea since the 1950-53 Korean conflict because it ended in an armistice rather than a peace treaty.
Tensions have risen since North Korea carried out two nuclear bomb tests last year and two ICBM tests last month.
Two U.S. B-1 bombers flew Monday from Guam over the Korean Peninsula as a part of its "continuous bomber presence," a U.S. official said, in a sign of the strategic importance Guam holds.
The alert status at Andersen Airforce Base on Guam had not been changed as of Wednesday morning, according to the duty officer at the base's public affairs office.
U.S. intelligence officials told Reuters, North Korea has accelerated its efforts to design an ICBM, a miniaturized nuclear warhead, and a nosecone robust enough to survive reentry through the Earth's atmosphere’.  And North Korea's ICBM tests last month suggested it was making technical progress.
Lockheed Martin Corp, the Pentagon's No. 1 weapons supplier, said Tuesday its customers are increasingly asking about missile defense systems.
THE BOTTOM LINE:  The question begging to be asked here is– Are we going to have nuclear war?  According to experts, we are entering a situation far more perilous than the standoff with Russia’s Khrushchev during the Cuban missile crisis under the Kennedy administration. Both Russia and the United States understood the probability of mutual annihilation, which is what kept us from entering into nuclear war with the USSR. But here we have a situation where North Korea is run by a psychopath.

As I said in my previous article that we should shoot down any more missiles launched from North Korea whether they are tests or not. The assumption that all missiles launched from North Korea will just be more tests would be a big mistake.  We can’t afford to assume the baring of teeth and the cry of wolf is meaningless anymore. Not when they have directly threatened a specific target of a U.S. territory and military base.

Do we want another Pearl Harbor? Or worse yet another Hiroshima?  I hope you have your bomb shelter, your gas mask, and your Iodide tablets ready.


Disclaimer - The writer of this blog is not responsible for the language or advertisements used in links to referenced articles as source materials.
Posted by de Andrea at 9:04 AM