Even though I rarely write about racist disputes, to me it is just silliness.  But I just have to weigh in on this BLACK LIVES MATTER issue. Even though a few ignorant people have accused me’ of being racist. Usually when I say something negative about Islam.  Yes I have been accused of being racists against Muslims…

Just in case you might be among those few, as I said “Ignorant people,” I must inform you that Muslims or Islam is not a race!  Need I say more?

With that said, and in light of the recent shootings in Dallas Texas which also moves me to write this piece, and put into prospective that at the core of this issue is mostly false information.   Coming from a family of several police officers this story has become personal.

A study posted by a researcher at the John Jay College of Criminal Justice shows that more whites are killed by police than blacks or Hispanics.  And where’… might I ask, are the protests about that.
The study comes out as two more high-profile deaths of black men at the hands of police have generated outrage across the country.  A video showing police in Baton Rouge shooting a so-called unarmed black man outside a convenience store later turned out have been armed and pulled his gun on a homeless man for panhandling him is being investigated by the Justice Department.

In the uproar, it is and will be forgotten that Sterling—just like all the other well-known recent cases of blacks who died in police confrontations—had a ‘rap sheet’or criminal record which would most certainly classify him as “extremely dangerous.”
According to court records, Sterling’s arrest history goes back to 1996 and is as long as my arm check it out here:

In any normal society, the correct procedure would be to wait for the judicial process to complete. If, as the officers in question claim, they were justified in shooting Sterling, and the evidence supports their account, then they should be exonerated.
If, however, the officers did indeed dramatically overstep the boundaries, then they should be punished severely.
This logical process—called the rule of law—is however unacceptable to the anti-white anti-America Communist media, and the Fabian Communist supported “Black Lives Matter” movement, which operates on a “whites are always to blame” basis, no matter what the facts might indicate. 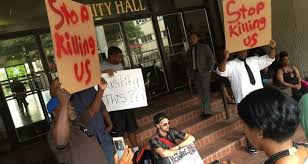 Protests in Baton Rouge included the usual call to whites to “stop killing” blacks. In reality, blacks kill far more blacks than cops and whites combined, but this fact is ignored in the drive of the Fabians to incite hatred only to create chaos.

For example, the controlled media and the “Black Lives Matter” do not protest and riot about the fact that 90 percent of black homicides are committed by other blacks in the U.S., according to official FBI statistics.

And READ It’s All about Race: the Mestizo with the Anglo Name

Where is the outrage about that?

In 2013, of the approximately 660,000 crimes of interracial violence that involved blacks and whites, blacks were the perpetrators 85 percent of the time. This meant a black person was 27 times more likely to attack a white person than vice versa. A Hispanic was eight times more likely to attack a white person than vice versa.
Rather than give prominence to these facts, the Communist media prefers to focus upon the occasional incident where there is even the smallest chance of proving “white racism”—because it suits their open agenda of inciting riots and hatred against white people.
From The Washington Times: As researchers [like me] are quick to point out, FBI data on police shootings by race is notoriously incomplete, which may explain why Peter Moskos, assistant professor at the John Jay College of Criminal Justice at the City University of New York, decided to use figures from the website Killed by Police.

Based on that data, Mr. Moskos reported that roughly 49 percent of those killed by officers from May 2013 to April 2015 were white, while 30 percent were black. He also found that 19 percent were Hispanic and 2 percent were Asian and other races.

His results, posted last week on his blog Cop in the Hood, arrived with several caveats, notably that 25 percent of the website’s data, which is drawn largely from news reports, failed to show the race of the person killed.

Killed by Police lists every death, justified or not, including those in which the officer had been wounded or acted in self-defense.

“The data doesn’t indicate which shootings are justified (the vast majority) and which are cold-blooded murder (not many, but some). And maybe that would vary by race. I don’t know, but I doubt it,” Mr. Moskos said on his blog.

While not a strictly scientific approach to an analysis, as a look at raw data, it's convincing, and at least deserves a reasonable look see.  But the ‘Black Lives Matter’ group would rather shoot first and ask questions later as they say… or whatever your do don’t confuse me with the facts.

Mr. Moskos listed two possible reasons for the racial disparity. The first is that police assigned to largely black neighborhoods face “more political fallout when they shoot, and thus receive better training and are less inclined to shoot.”

The second is that police assigned to black communities with high crime rates are more accustomed to dangerous situations and thus are more likely to be able to resolve them without resort to lethal force.

The study confirms similar conclusions from studies done by the interest group ProPublica and by Politifact.

We know all this intuitively, but in order to crack the false narrative from Black Lives Matter, facts must be uncovered.  And the facts in this case are plain: whatever racial disparity there is in police shootings, neither side appears to be targeted.

Far more white people than blacks are killed by police in America, both proportionally to their population sizes and in real numbers, completely contrary to the anti-white propaganda put out by the “Black Lives Matter” campaign and its allies.
According to statistics maintained by the far-left extremist Guardian newspaper in Britain, more than half of all people killed by US police this year have been white, while only 25 percent have been black.

The Guardian’s statistics are contained in a tally of police killings maintained by that newspaper.  This was set up by the Guardian a far-leftist newspaper with the intention of “proving” how “racist” the police in America are—an aim which has now completely backfired in face of the facts.

According to the Guardian’s tally, of the approximately 1001 people killed by police this year in America, 502 were white, 250 were black, 163 were Hispanic/Latino, 18 were Asian/Pacific Islander, 13 were American Indian, and 54 were other/unknown.

Should I be afraid?  Maybe I should make a sign, and start a group, and get funding from George Soros.

For example, according to the US Department of Justice Homicide Trends in the United States, 1980–2008, blacks accounted for 52.5 percent of homicide offenders from 1980 to 2008, with whites 45.3 percent and “other” 2.2 percent.
These figures infamously added all Hispanic crimes into the “white” category, and once this distortion is stripped out, it is estimated that around 90 percent of all violent crimes in America are committed by nonwhites.

According to the National Crime Victimization Survey in 2002 (United States Department of Justice. Office of Justice Programs. Bureau of Justice Statistics.  National Crime Victimization Survey: Unbounded Data, 2002, the black arrest rate for robbery was 8.55 times higher than whites, and blacks were 16 times more likely to be incarcerated for robbery than non-Hispanic whites. Robberies with white victims and black offenders were more than 12 times more common than the reverse.

These statistics all clearly show that nonwhites in general—and blacks in particular—commit, for whatever reason, both in real terms and proportionally—far more crime than do whites.

It is therefore logical that they will feature far more than whites in any negative interactions with the police—yet, despite this, a larger number of whites are killed by the police than any other racial group.

The propaganda surrounding the “Black Lives Matter” campaign is therefore, based on lies, and an underlying anti-white racism as well as the media acting as the useful idiots of the far left wing Fabian Communist party which supports and finances the majority of the insurrections of Black lives Matter, Occupy Wall Street, Ku Klux Klan, Neo-Nazi, White Nationalist, Racist Skinhead, Christian Identity (a Nazi group), Neo-Confederate, Black Separatist, over 700 in all, and any other hate group for the purpose of creating political and social discontent—and nothing else.

I rest my case…

Thanks for listening - de Andréa

Please pass on this article to everyone on your email list.  It may be the only chance for your friends to hear the truth.

Copyright © 2014 by Bottom Line Publishing, All Rights Reserved -  Permission to reprint in whole or in part is gladly granted, provided full credit is given.


Disclaimer - The writer of this blog is not responsible for the language or advertisements used in links to referenced articles as source materials.
Posted by de Andrea at 8:11 AM