Church of the Epiphany in Washington DC opens their doors to Muslim Jihadists. 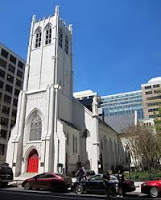 This is happening all over the United States and Europe. In Europe there are now more Mosques than Churches. In less than 30 years all the West will be part of the IS.

The century-old Church of The Epiphany has hosted famous visitors from Abraham Lincoln to Franklin D. Roosevelt. But for several years now it has also been extended to members of the Muslim Jihadist Ideology.
Every Friday at 1 p.m., instead of the church bells that usually ring on the hour, you will instead hear the “ASAN” The Muslim call to prayer.
“The Muslim population is growing,” said Abrar Ansari, a management consultant who also is a so-called interfaith coordinator for the Muslim community. “We do need places of worship.”
The Adams Center, one of the largest Muslim community centers in the area, has a mosque with more than 10,000 followers. But members needed more room and more convenience for a faith that requires followers to pray five times a day. Five years ago, they asked officials of the Church of the Epiphany if they would open their doors to the Muslim faithful.
“And we said we would be happy to give them space,” said the Rev. Ms. Randolph Charles of the Church of The Epiphany. In return, the Adams Center “makes a small contribution,” Charles said.  But I can’t help but wonder how much a small contribution is, since the Mosque had a larger congregant than the church does.
Farooq Syed, president of the Adams Center, said that in today’s pluralistic society, “we must understand each other, we must understand each other’s needs, and we must accommodate each other.”
Well…that sounds all politically correct and everything but I’ve got news…It leads to a one way street.   This is a good time to hear what a Christian Pastor David Wood of Dearborn Michigan who really understands Islam and all their taqiyyah/lies, has to say about the ‘Three Stages of Islamic Jihad.
And then it seems that the church is not only promoting the satanic ideology of Islam but the religion of LGBT Sodomism as well.  With a big sign in front of the church.
I can concur with the message on the sign but the flag, the colors of the rainbow that the sodomite perverts stole from the rest of society just like they stole the word gay.
If they fly their flag they are promoting their Sodomistic evil ideology.   I wonder if next they will fly the black flag of ISIS.

And then what does the Christian Bible say about people with false doctrines.
"For many deceivers have gone out into the world, those who do not acknowledge Jesus Christ as coming in the flesh. This is the deceiver and the antichrist. Watch yourselves that you might not lose what we have accomplished, but that you may receive a full reward. Anyone who goes too far and does not abide in the teaching of Christ, does not have God; the one who abides in the teaching, he has both the Father and the Son." (II JOHN 7-9).

The reason for the great amount of attention given to truth, the commandments, and obeying them is the very real danger which existed then, (and also exists today) of being destroyed by a false teacher.

(I JOHN 2:18-20). Dear children, this is the last hour; and as you have heard that the antichrist is coming, even now many antichrists have come. This is how we know it is the last hour.  19 They went out from us, but they did not really belong to us. For if they had belonged to us, they would have remained with us; but their going showed that none of them belonged to us. 20 But you have an anointing from the Holy One, and all of you know the truth.

The particular false teachers of John's day were called "deceivers" and "antichrists." They have "gone out into the world" showing that they were once within the church.  When Mahammad was driven from Mecca to Medina He converted Jews, Christians, Pagans, Atheists, he was not choosy.  Most of the Middle East was Judaism Christian or Pagan. Most converted to Islam.  As Paul said in verse 19 ”They went out from us…”  Verse 20 “But you have an anointing from the Holy One, and all of you know the truth.”

They were denying that Jesus had come "in the flesh." They said that that which was divine could not become material flesh. He wasn't really here! His body was an illusion! He did not really die! These teachers were the antichrists. They lived and worked in the first century. Moreover today this absolutely describes Islam my friend.

John cautions "watch yourselves" because it would be possible to "lose what we have accomplished." Calvinists and others who conveniently believe it is impossible to fall from grace, ignore these scriptures and say these people were in danger of losing "just part of the reward at the judgment seat of Christ." But John says nothing about losing a part of anything. He says we can lose it all or we can receive it all; “a full reward!”

If we go beyond or afoul of the teaching, or doctrine of Christ, then we forfeit our relationship with God. This letter stresses the need to walk in the commandments of God. If we push them aside substituting our own doctrines and practices, or facilitating other doctrines then we do not have God. We must continue to abide in the teaching of Christ to maintain our relationship with Him and the Father. Yes! The truth does matter!

"If anyone comes to you, and does not bring this teaching, do not receive him into your house, and do not give him a greeting; for the one who gives him a greeting participates in his evil deeds." (II JOHN 10, 11).

“…do not receive him into your house,” and especially not into Gods House.  House or home, I also believe it means our country.  America is my home, why are the Muslim Satanist here in my home.  Well it’s likely because of what Obama said in one of his campaign speeches “This is no longer a Christian Nation…”  My home has become a dungeon of Hell.

If it is true that the "elect lady" is a church, then "house" here could be the place where the saints assemble to worship. Or perhaps Christians are being told not to allow a traveling false teacher a place to stay. At any rate, Christians are prohibited from lending encouragement to false teachers. Do not even wish them well in their work, because whatever encouragement or support we may give them will only serve to aid in the accomplishment of evil. The false teacher must be shown that his teaching is unacceptable.

Truth will be with us forever. It makes us free. We must be loyal to the way, the truth and the life.
THE BOTTOM LINE: What is happening to the Christian Church?  As I predicted several years ago it will all but disappear.  Only a remnant will remain. And it will likely be underground.  Actually I can’t take full credit for that prediction, the Bible says as much.  “Let no one deceive you by any means; for that Day will not come unless the falling away comes first” (2 Thessalonians 2:3

Paul writes that it will involve the revealing of “the man of sin…the son of perdition, who opposes and exalts himself above all that is called God or that is worshiped, so that he sits as God in the temple of God, showing himself that he is God” (2 Thessalonians 2:3-4).

Is Paul referring to Muhammad the Caliphate the Mahdi or to maybe Allah himself?

Paul didn’t know it then but I believe he was speaking about Islam’s god Allah and the Islamic Mahdi, the antichrist.   The Great Deceiver.

“Yes, the time is coming that whoever kills you will think that he offers God a service” (John 16:2).

IGNORANCE – DECEPTION – ENABELMENT – DESTRUTION
It all begins with Ignorance my friend…

Thanks for listening - de Andréa

Please pass on this article to everyone on your email list.  It may be the only chance for your friends to hear the truth.

Copyright © 2014 by Bottom Line Publishing, All Rights Reserved -  Permission to reprint in whole or in part is gladly granted, provided full credit is given.


Disclaimer - The writer of this blog is not responsible for the language or advertisements used in links to referenced articles as source materials.
Posted by de Andrea at 6:02 PM