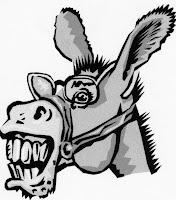 Oh America, how deceived you have become. The snake of Islam has you spellbound. What will it take to defeat the power that this enemy has over you?
On the other hand, you might be dumb as an a…

The U.S. Justice Department is co-sponsoring a convention to be held by the Islamic Society of North America (ISNA), an unindicted co-conspirator in an ongoing federal terrorist funding case, a move that is raising some concern among the Justice's rank and file.
Justice lawyers have objected to the affiliation with ISNA, fearing it will undermine the case against the Holy Land Foundation for Relief and Development in Dallas. Another so-called Islamic charitable organization, previously known as the Occupied Land Fund. [Note: All Islamic charities are terrorist charities]
"There is an outrage among lawyers that the Department of Justice is funding a group named as a co-conspirator in a terrorist financing case," said a Justice lawyer who spoke to The Washington Times on the condition of anonymity.

One can hardly blame anyone in Washington for wanting to remain anonymous. It seems the truth is almost unheard of these days. And this, in a country where we have freedom of speech, tisk-tisk.

According to an e-mail from Susana Lorenzo-Giguere, acting deputy chief of the Voting Rights Division, the sponsorship will involve sending government lawyers to staff a booth promoting Islamic relations for the Labor Day weekend event in Illinois.
"This is an important outreach opportunity, and a chance to reach a community that is at once very much discriminated against, and very wary of the national government and its willingness to protect them," Mrs. Lorenzo-Giguere said in an e-mail obtained by The Washington Times.
"It would be a great step forward to break through those barriers. And Chicago is lovely this time of year," Mrs. Lorenzo-Giguere said.
ISNA is one of more than 300 unindicted co-conspirators in a case against the Holy Land Foundation, whose top officers are accused of raising money for Hamas.Justice spokesman Erik Ablin said the agency participates in the annual convention to educate Muslims about their civil rights.
"The Civil Rights Division will have a table at the ISNA convention over Labor Day weekend to hand out literature and answer questions about the division's work. The ISNA convention attracts more than 30,000 American Muslims every year, and the division has had tables at the convention in previous years," Mr. Ablin said.The Justice Department declined to say how much the sponsorship will cost."This is just staggering, it's outrageous," the lawyer said. "Lawyers from the Civil Rights Division traveling to Chicago on the federal dime. This will cost thousands of dollars."
A second lawyer responded to Mrs. Lorenzo-Giguere's e-mail questioning the participation and said it "seems like an odd time for one part of DOJ to lend credence and visible support to ISNA at the same time DOJ prosecutors will be called on to defend their decision to name ISNA as a conspirator."
"Presumably the prosecutors have determined that they might need that testimony admitted; I hope we don't undermine their position," the second lawyer said. "Needless to say, [the Holy Land Foundation trial] is a very significant case."Mohamed Elsanousi, director of communications and community outreach for ISNA, says the annual convention is open to anyone who provides services or information of value to convention participants.
"For many years, we have welcomed representatives from U.S. government agencies who wish to share information about their services and have the opportunity to reach out to the Muslim American community," Mr. Elsanousi said.
The convention features book signings, musical entertainment and seminars on family, community service and political activism.

THE BOTTOM LINE: While our government encourages enemy propaganda here at home, our military is prosecuted for doing their job of trying to stay alive in Haditha. I am not sure who I should fear the most, the U.S. government or Islam.

This article mentions the fact that the ISNA is a co-conspirator in a terrorist charity case; however, the DOJ just might be a co-conspirator as well in that our government has this bad habit of giving support to Islams agenda of infiltrating this nation. If it isn’t CAIR (Council on American Islamic Relations), another domestic government supported terrorist organization, being hired as advisors in home security, it is the indoctrination of Islam and the introduction of Sharia law in our government public schools.

Even if we have the stones and the stick-to-itiveness to win this war in the Middle East, we are encouraging the surreptitious incremental invasion and infiltration of these same Islamic terrorist here at home.

While the Muslims did not actually invent the game of Chess as they claim, they are nevertheless good at it. They stole the game, as they did many other things, from the Persians who invented the game of Shatranj. [Chess] What’s more, is that Islam has learned to play the game for real, in a dangerous deceptive way of stealthy pawn playing. Hiding behind among other things, charities, civil rights, and the “Nation of Peace”