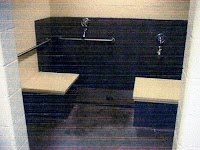 KCI admitted installing foot-washing benches in a restroom at the airport, but also denied that they are intended for Muslim cab drivers. Kevin Peterson who is the union steward for the air traffic controllers union is in denial as to the purpose of the KCI basins.Wash areas, they said are used for any wash purpose by any of the users, including filling car wash buckets.” I have news for you Kevin that is what a $6.95 exterior green garden hose is for, not a $23.000 miniature shower.

Despite the fact that no other religion was demanding foot washing facilities he insisted the wash benches were not "built for the exclusive use of any ethnic group or culture”. Then in a contradictory statement Mark VanLoh, director of the Kansas City Aviation Department said, “The majority of our drivers are Muslim, so preventing them from praying at all was not an option, especially in our public terminal restrooms. This was the best solution, and those facilities were added without public money."

He added that cab drivers paid for construction through a one-dollar per-trip fee.
In October 2005, the KCI Airport Police first solicited advice from other law enforcement regarding "wash bench facilities for those of Islamic faith," according to internal e-mails. In one e-mail sent to members of the Airport Law Enforcement Agencies Network, or ALEAN, KCI Airport Police brass asked, "If you do have such an area, do you refer to this location as a place for those of Islamic faith to [go to] prepare themselves for worship?"

The KCI Airport Police are responsible for the taxicab drivers and the building they use at the airport to wait on fares. The building contains the restroom with the four new foot-washing benches.

Peterson said he had asked about the issue in May, and never got a response. Then when he followed up after the recent Indianapolis report, he got the note from McBride.

Some 250-taxicab drivers operate at KCI Airport in Missouri, one of the largest airports in the U.S., linking some 10 million passengers between mid-America and other U.S. cities. One internal KCI Airport Police email said, "approximately 70% of the drivers are [of] Middle Eastern heritage and practice the Islamic faith."
Muslims are required to wash their feet and other body parts before praying to Allah five times a day. They often complain that public restroom sinks do not accommodate their needs. Floor-level basins and benches make it easier for them to perform their foot-washing ritual.

Other major airports have dealt with increased demands from Muslim cab drivers. Cabbies at Minneapolis-St. Paul International Airport, for instance, recently caused a stir when they refused to carry passengers possessing alcoholic beverages or accompanied by seeing-eye dogs. Alcohol is forbidden, and dogs are considered unclean in Islam. What I have trouble understanding is why we just don’t tell the Muslims that they are in America, not in Islam… Well…on second thought, maybe they are.

THE BOTTOM LINE: I find it interesting that this has been a Christian Nation for better than 200 years and yet Christians have not to my knowledge ever demanded public foot-washing facilities at schools, newspaper stands or airports. Oh, yes! Christians have a foot washing ceremony as well, dating back farther than Islam’s Muhammad. Approximately 2000 years ago, where Christians wash each other’s feet in honor of Jesus Christ who out of love, washed the feet of His disciples.

Moreover, Muslims consider dogs unclean? Well, I have to take exception to that; more importantly, my dog Sir John Cooper takes exception to that, Sir John who is running for U.S. Senate in 08 against the other dogs, considers Muslims unclean. He says, “they must be, if they have to wash five times a day”.
I spend a considerable amount of time at the hardware store in town, I wonder what would be the response if I demanded Christian foot-washing basins be installed so if I felt the need to wash someone’s feet, we would not have to inconvenience ourselves and use the garden hose outside.

Moreover, as a Christian, I outgrew the need for prayer rugs when I stopped living in tents, now I just use the one attached to my floor…

Muslims Against Sharia denounce the decision by the Indianapolis International Airport to install footbaths. The controversy will further alienate the non-Muslim population. Footbaths will be used as urinals, which will provoke tensions, and more importantly, installing religious ritualistic devices on public property clearly violates the separation of Church and State.