Obama Is Funding The Beheading Of Christians

Obama Is Funding The Beheading Of Christians
Obama’s so-called freedom fighters accused two Christians of “aiding and abetting” the enemy; that is, Bashar Assad’s military.  Well of course they are, Assad is   protecting them against Obama’s “Freedom Fighters”.

We’re all supposed to be on the side of the rebel forces, because we’re supposed to hate Assad, why… just as it was in , , and .  Obama is supporting terrorists with the tax dollars that your kids will starve to pay back. 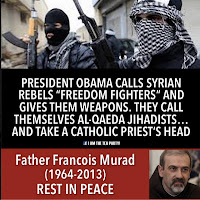 what did Assad ever do to you?  The media has been working hard to demonize him to try to rally support for Obama’s intervention there.  The truth is, it has nothing to do with Assad; it has everything to do with the promotion of Obama’s terrorist Muslim Brotherhood in

Now don’t misunderstand, I’m not saying that Assad is a great and just leader.  But just as in , as long as he is not a threat, minds his own business, and stays there, we should not be involved in trying to oust him or meddle with their political affairs.  It’s none of our business.

But Obama wants desperately to aid and abet the enemy of the free world, ‘The Muslim Brotherhood’.  So via the CIA, they have been sending so-called “light arms” to terrorist organizations there.  “Light arms,” oh really!  Like anti-tank missiles.  (If those are the kinds of weapons that constitute “light arms” in , I wonder what fifty caliber machine guns are.)

Read a report by the Washington Times
“A priest and another Christian were beheaded before a cheering crowd by Syrian insurgents who say they aided and abetted the enemy, President Bashar Assad’s military, foreign media reported.  An undated video that made the Internet rounds on Wednesday showed two unnamed men with tied hands surrounded by a cheering crowd of dozens, just moments before their heads were cut off with a small knife, Report said.  The attackers in the video then lifted the head for show, and placed it back on the body.  The incident took place in the countryside of Idlib, the media report said.”

Warning…this video is graphic - but everyone should see what Muslims do to Infidels like you.  Thanks to the Obama administration’s support for Islamic terrorist organizations, civilians, including Christian men, women and children, are all being killed.  But it’s all collateral damage, right?  I wonder if that’s what Obama would say if he saw the recently surfaced video of two Christians being beheaded by Obama’s terrorist friends while a group of Obama’s Syrian “Freedom Fighters” watched and cheer Allah Achbar:

Trust me Muslims like Obama don’t want freedom; they want your head and to dominate the world, as Muslims are expressing in these pictures.

And these are the psychopathic so-called freedom fighters that your psychopathic president Obama is supporting with your money, by sending more weapons and providing them money and training.  Do you still think we’re fighting a “war on terror?”  Hasn’t this whole “war on terror” become a sick joke?  Does anyone actually believe our military is there in the to fight and kill terrorists?  On what planet does providing weapons, money, training and food supplies to terrorists constitute “fighting terrorists?”

James Madison’s words ring true today:  “If Tyranny and Oppression come to this land, it will be in the guise of fighting a foreign enemy.”

Thanks for listening – de Andréa


Copyright © 2013 by Bottom Line Publishing -  Permission to reprint in whole or in part is gladly granted, provided full credit is given.
Posted by de Andrea at 8:13 AM