The 12th School Shooting This Year

The 12th School Shooting This Year

My prayers and condolences of course to the families and the victims of the terrible Florida shooting. No child, teacher or anyone else should ever have to feel unsafe in an American school. But they do! And they are!


This is February 14th, 2018, Valentines day, is supposed to be a happy day, it’s only the middle of the second month of the year and this is the 12 mass school shooting this year in GUN FREE ZONES. When are the American people going to say this is enough and arm the teachers? That is what intelligent people do when they are repeatedly attacked. But I have to assume because of the popular Gun Free Zones the vast majority in the United States have become so dumbed down that there are few intelligent people left. 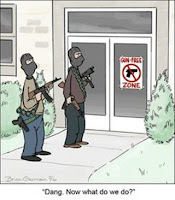 The cartoon at right says it best as to what these ignorant people actually believe and how the GUN FREE ZONE signs protect your children.

Authorities said gunfire appeared to break out at a South Florida high school shortly before students were dismissed Wednesday afternoon, and law enforcement officials fanned out to search for a shooter they said remained at large.

At least 20 people may have been injured, but that number may be as high as 50 people, according to Dan Booker, a fire chief from a nearby city. Some of those injured are students who were shot, Booker said.

Booker said he is seeking aid from the Coast Guard and other agencies because many victims will need to be transported by helicopter.

Video from the scene showed police surrounding the building and students being quickly marched away from Marjory Stoneman Douglas High School in Parkland, Fla., a city northwest of Fort Lauderdale. News cameras also captured people being wheeled out on stretchers, though their conditions were not immediately clear. A tweet from the school’s parent district, Broward County Public Schools, said, “We are receiving word of multiple injuries.”

Gov. Rick Scott (R) said he had been briefed by the Broward County sheriff, whose agency was leading the response, as well as by the county’s school superintendent. President Trump was notified of the shooting, Deputy Press Secretary Lindsay Walters said.

THE BOTTOM LINE: Soon you will likely hear from the Nazi media, another call for the banning of guns from schools. Typical of Nazis.  That has been going on since Columbine. One has to ask themselves: Just how has that been working out for your children. While the ignorant brainwashed talking heads are arguing that guns are bad, your children are dying. Its people that are bad my friend. And whether it is a knife a bomb a rock a hammer or a gun it doesn’t matter. Nothing else on the planet uses any of those things to hurt people. Just people do! You can’t ban weapons anymore than you can ban people.

On a personal note:
I am not a Journalist, I am an Opinion Editorialist, so I can say anything I want about any Issue. If Journalists do that they are liars and they usually are. While they are supposed to report the facts and the facts only, I can offer my opinion. So as they continue to lie and report their opinion as fact…I will continue to give you my opinion as I should.
Moreover, I can give you an intelligent opinion because it has become fairly obvious that I am among the few left in the world that have the ability to think independently of the masses. The reason for that is, I believe little of what anyone says about anything, especially the media. I do the research myself. Journalists like sheep just blindly follow their programming and each other. If you think I am blowing my own horn you would be right. If I don’t who will?
If you really want your kids to be safe then pull them out of school…period. Then when a large number of parents have done that, the School districts will have to listen. Then you can demand that the school either hire armed guards or better yet train and arm the school personnel to defend your kids. As it is now all anyone can do is cower and hide in the face of the enemy. Bear in mind this shooting only took 5 minutes, but it took 20 minutes for the first responders to get to the school so the shooter actually had another 15 minutes to shoot another 60 or more kids and teachers. He instead chose to use the time to escape. That’s the reality! That’s LUCKY FOR THE REST OF THE KIDS…

Thanks for listening my friend. Now go do the right thing, pray and fight for truth and freedom.  If you would like to write me direct with a question or a comment you can contact me at writedeandrae@hotmail.com
- de Andréa
Please pass on this article to everyone on your email list.  It may be the only chance for your family and friends to hear the truth.
The Fine Print
Copyright © 2005 by Bottom Line Publishing, All Rights Reserved -  Permission to reprint in whole or in part is gladly granted, provided full credit is given.
Disclaimer - The writer of this blog is not responsible for the language or advertisements used in links to referenced articles as source materials.