Islamberg is one of the more the 30 Islamic Terrorist Training Camps in the Continental United States.

DEPOSIT New York — Hidden in a remote area off a primitive dirt road lays a mysterious 70-acre compound in which more than 100 Muslims live in seclusion, following the teachings of its founder, a radical cleric with ties to terrorism.

The following publication is an introduction to a series of articles. This article is not complete. The purpose of this tasty morsel is to cause awareness that 911 is not and wasn’t, as one may have been led to believe, the last attack on U.S. soil.

This is the first in a series of small clips of articles produced mostly by Doug Hagmann Director of the North Eastern Intelligence Network and Military Affairs that show that the Nation of Islam has been for the last 30 years, surreptitiously and incrementally infiltrating America, building a network of trained terrorist cells that will ultimately be unleashed on a sleeping, ignorant and unsuspecting America.

It is neither a Taliban stronghold outside Jalalabad, nor an Islamic madrassa on the outskirts of Karachi. It's a place called Islamberg, a closed and seemingly quiet community at the foot of the Catskill Mountains in upstate New York, about three hours north of Manhattan. It's also a compound shrouded in local rumors, mystery, and fear; sitting near the huge reservoir system that provides New York City with most of its drinking water.

Quietly nestled in the woods, Islamberg remained unnoticed for the two decades leading up to Sept. 11, 2001, when the World Trade Center and the Pentagon were attacked by a determined band of Islamic terrorests. That’s when people started questioning ties of the community called Islamberg to a Pakistani cleric that was at that time known to be connected to worldwide terrorism. They also started talking about the unusual sounds of gunfire and explosions some said they heard emanating from the compound.

But before you leap to conclusions and head to the Catskills to personally fight the war on terror; you need to know the entire story. The truth, as is often the case, is a lot more complicated than the headlines suggest. Islamberg is one of many such Muslim camps all throughout the United States. Islamberg got its start about 20 years ago, when inspired by the words of the Sufi cleric Sheikh Syed Mubarik Ali Shah Gilani, a group of primarily black Muslims from Brooklyn left New York City to escape crime, poverty and racism. Aiming to lead what they believed was a peaceful and holy Muslim life; they built a community of some 40 family houses, their own grocery store, and a bookstore.

And they weren't alone:
Other groups, also inspired by Gilani, have set up similiar communities in 19 other states. According to the group's own Web site, the Islamberg community is still "struggling," and is asking for donations to complete its mosque. According to locals, the land previously belonged to a Deposit, N.Y., woman who opened up her home in the in the late 1970s or early '80s to disadvantaged youths from the city so that they could avoid being led astray by a financially and morally bankrupt urban environment. Those boys, according to locals who were friendly with some of the group, eventually went on to form Islamberg, and at some point they were joined by another group of more militant Muslims, who created something of a rival faction within the community.

And then Sept. 11, 2001 happened. Anti-Muslim sentiment soared throughout the United States, and in the case of the Islamberg compound, concern grew among their neighbors.

Sheikh Syed Mubarik Ali Shah Gilani, the Pakistani Sufi cleric whom the Islamberg residents call their spiritual leader, has long been suspected of being one of the founders of a group called Jamaat al-Fuqra, a group that the U.S. and Pakistan say is responsible for a long list of terrorist activities around the world, including murders of rival religious figures in the U.S.

Gilani also was the man American reporter Daniel Pearl was going to see when he was abducted and beheaded/murdered. Gilani has denied any connection with either Pearl's death or with Jamaat al-Fuqra.

The possible connection between Islamberg and extremist Islamic terrorism wasn't lost on authorities. "We've had files on them for years," said Sgt. William Vymislicky of the New York State Police. FBI Special Agent Richard Kolko said that he could neither confirm nor deny any current investigations, but that the bureau follows up on every reported case of possible terrorist activities.

According to some locals, the Islamberg community has given them plenty of reason to be wary. If you visit the compound's entry gate, you will be stopped at a guard shack by men armed with guns. And some say that you sometimes can hear gunfire or even explosions coming from the area. "You'd better be careful if you go up there," several locals said. "They have guns."

Plenty of questions remain:
How close is Islamberg to Gilani?
How does it accept, reject or interpret the portions of his writings that espouse violence? Does the community send people overseas or to other camps for training? And, if it does, exacly what kind of training? How does the group see its relationship to the local community, and does it plan to do anything to improve it?

Islamberg's elders refused a request to visit with them and tour the compound, citing a recent spate of negative publicity. For now, it remains an enigma in the mountains.

11 June 2007: The headline on FoxNews.com reads: "Islamberg: A Terror Compound in New York ... or Misunderstood Neighbors?" and is a comprehensive and well-balanced article written by reporter Michael Y. Park about the Islamic compound we have been investigating for quite some time. The article quotes some nearby residents who describe the enclave as an innocuous, but asks some important questions.

In 1980, a Pakistani cleric named Sheikh Mubarak Ali Gilani began preaching against Western culture at a Muslim mosque in Brooklyn, NY. He promoted Islam as the path to a better life and called for fighters to join his holy war against the Soviet occupation of Afghanistan. With his new American recruits, Gilani established Islamberg, a 70-acre commune west of the Catskill Mountains near Hancock, NY.

Today, Jamaat ul-Fuqra has more than 35 communes and more than 3,000 members spread across the United States, all in support of one goal: the purification of Islam and conquest through violence.

Gilani outright denies any ties to the terrorist organization Jamaat ul Fuqra. Our undercover investigation, however, captured admissions by residents of Islamberg who have pledged their complete allegiance and support to the terrorist Sheikh.

Notably, Gilani was a participant in a “terrorist summit” In Khartoum, in December 1993, at which time he rubbed elbows with Osama bin Laden, Ayman al Zawahiri, and other well-known and still sought Islamic terrorists. According to one government report, the Canadian Broadcasting Company filmed Gilani and the others shouting anti-U.S. and anti-Semitic chants such as “Death to the Jews, Death to America, and Death to the CIA!”

"Now, here comes the latest aggressor said Douglas J Hagmann. In one breath he concocts so many lies that one wonders how a person with common sense can do such a thing. His statements themselves are self-contradictory, identical to his predecessor, Yusuf Bodenski." Sheikh Syed Mubarik 'Ali Gilani, pictured below.
Source: http://www.iqou-moa.org/editorial/terror_roots.htm 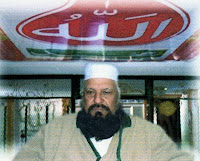 “There are acts of terror being planned against the citizens of America, in America, by Islamic extremists who live, work, and play among us. Most people don’t realize how serious the threat is, and they feel insulated against terror attacks since 9/11 has become not much more than a distant memory.” --Federal source

10 June 2007: Last week, the U.S. Attorney’s Office in the Southeastern District of Ohio filed an exhibit list with the court of 102 individual items that connects three-(3) Muslim men in a Columbus, Ohio Islamic terrorist cell. The evidence connects the three terror defendants pictured above (from left to right) Nuradin ABDI, Christopher PAUL (a/k/a Abdul MALEK), and Iyman FARIS (a/k/a Mohammad RAUF) to each other and to separ

ate acts of planned terrorism inside the U.S. According to one federal law enforcement source speaking to this investigator on the condition of anonymity, the unsealed indictments, previous testimony in the case against Iyman FARIS, and the planned acts of terror is:
“paints a disturbing picture of what is taking place in the U.S. today among radical Muslims in American mosques.” According to this source, “there are acts of terror being planned against the citizens of America, in America, by Islamic extremists who live, work and play among us. Most people don’t realize how serious the threat is, and they feel insulated against terror attacks since 9/11 has become not much more than a distant memory.”

Trilogy of Terror: al Qaeda, Jihad and Islam
Until the so called “religion” of Islam gets its act together and reels in the “ones that supposedly hijacked the religion” it needs to be placed on hold from developing any further in this non-Islamic country of the United States.
By Randy Taylor, Independent Analyst

Edited and published by BOTTOM LINE PUBLISHING
Posted by de Andrea at 12:54 PM

hey! i'm going to cali this weekend and won't be back until september...here is the website i was talking about where i made extra summer cash. Later! the website is here